Packaging: Why Does It Matter?

WHAT ENVIRONMENTAL EFFECTS CAN MY CHARGER ENDURE?
2.5.1

The standard cabinet style for a battery charger is a NEMA 1 enclosure. NEMA 1 enclosures, such as the one pictured in Figure 2e, are made entirely of sheet metal, with provision for wall mounting or floor mounting, depending on the charger rating. Optional brackets are available for wall-mounted chargers, and some small floor-mounted chargers, to facilitate rack mounting.

Access to virtually all internal components is through the front door. The standard door requires a tool (usually a screwdriver) to open but isn’t lockable. Again, there is an option to provide a padlock hasp for the door.

The NEMA 1 design is vented, usually through vent hole patterns on the top, bottom, and one or more sides, which makes it non-waterproof. Falling or dripping water can enter the enclosure, so it isn’t suitable for wet locations or exterior installations (although drip shields are available that are effective against vertically dripping water).

For those locations, there are NEMA 12 and NEMA 4 designs.  NEMA 12 is designed to resist dripping and splashing water, and the ingress of dust and foreign objects, and may be provided with knockouts for external electrical connections. It isn’t intended for outdoor installation.

NEMA 4 is designed for indoor or outdoor installation. It is drip- and dust-proof, and will withstand hose-directed water. If a charger requires forced convection cooling, the NEMA 4 is fitted with watertight ventilation ports and dust filters on the ports. NEMA 4X is a corrosion-resistant construction, such as stainless steel.

Figure 2e: Example of battery charger in NEMA 1 enclosure during production before wiring has been completed 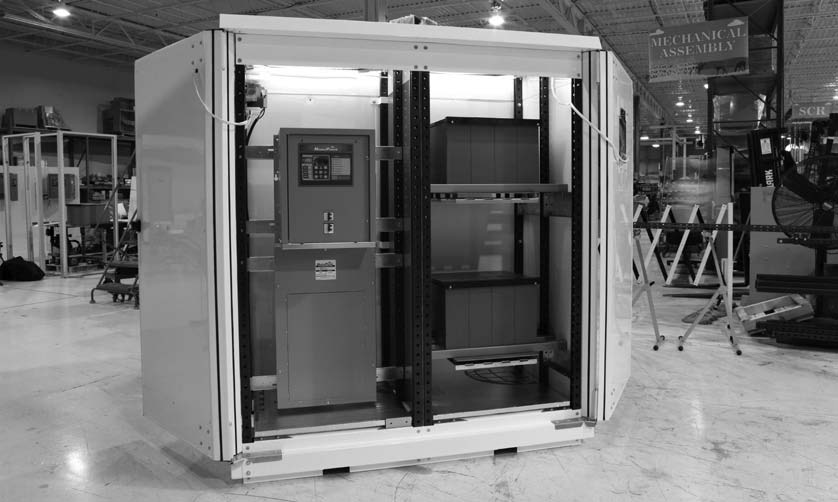 The IEC IP enclosure designation system defines construction features similar to the NEMA styles, but there is no exact correlation. An approximate equivalence can be determined from Table 2c. 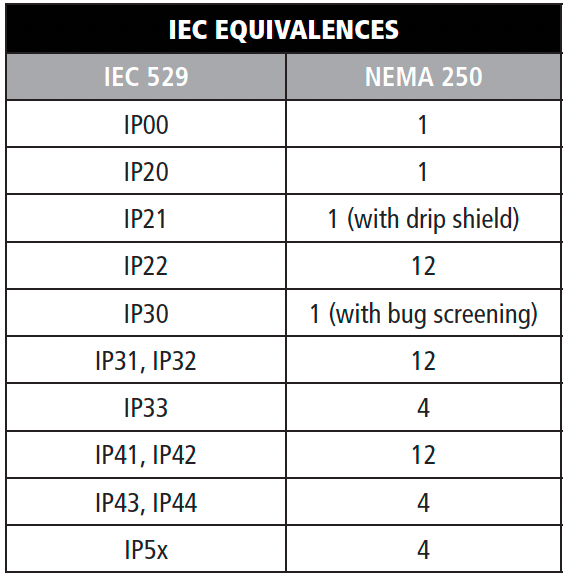 The degree of protection afforded by an enclosure is designated by “IP” followed by two digits (IPxy), that identify the level of solid object and water protection respectively, as listed in Table 2d. For example, IP22 protects against the ingress of moderately sized solid objects (approx. ½”) and dripping water at an angle.

The meanings of IPx5 and IPx6 raise an interesting question, by grading the force of water jets. NEMA 4 enclosures are designed to withstand hose-directed water, without distinguishing between water jets and powerful water jets. The test specified by NEMA to qualify a NEMA 4 enclosure uses a water jet delivering 65 gallons per minute. Is that powerful enough?

While we’re on that subject, if your charger is ever in a flood, consider replacing it. Even if the charger appears to operate following a flood, persistent damage from immersion will cause problems at some point.

Many chargers are mechanically designed to withstand some level of seismic activity. In the US, the expected severity of an earthquake is classified by seismic zones; zone 4 is the most severe. If you live in California, you already know this.

For example, HindlePower’s AT10 & ATevo series (single-phase) chargers are fully qualified for seismic zone 4, for installation at any point in the building (the tests are more severe for the upper floors of a building). AT30 & ATevo, the three-phase version, is qualified to zone 4 for the two smaller enclosures. The SCR/SCRF product line has no seismic qualification.

What altitude & temperature limitations do chargers have?
2.5.1.4

The method for sizing the battery charger presented earlier (SECTION 2.2.2) works for normal elevations, sea level to 3,000 feet, and for the charger’s normal specified temperature range, 0° to 50 °C (32° to 122 °F). Outside those ranges, some derating is required. In other words, you have to purchase a slightly larger charger than the sizing calculation would indicate.

What happens if we store a charger in a very hot warehouse – say 175 °F?

Not a good idea. This is the same as 80 °C. While most electronic components tolerate high temperatures without permanent effects, some components, such as LCD displays, might be damaged.

WHAT’S AVAILABLE TO HELP IN PLANNING FOR CHARGER INSTALLATION?
2.5.2

Site planning requires accurate information on equipment installation requirements, such as overall dimensions, mounting or installation considerations, weight or floor loading, and locations of conduit entrances or other wiring provisions. Standard installation drawings are usually available on manufacturers’ web sites, and the price is right. You may also be able to obtain documents for overall schematic diagrams, wiring diagrams, internal component layouts, and so forth. If you are ordering equipment with custom features, you can order an optional custom drawing package that will tell you everything you need for a successful installation.

WILL A CHARGER BE TOO LOUD FOR MY ENVIRONMENT?
2.5.3

In most cases, the sound level produced by a battery charger isn’t above 55dB(A), and is described as a low hum, similar to what is produced by a distribution transformer. This level is roughly equivalent to normal conversation in a quiet room. So, acoustic noise often is not a factor in deciding where to locate a charger.

If the charger shares a work location such as an office, keep in mind that the charger may produce up to 65 dB(A) sound level when charging at full tilt. That’s more like a loud conversation. But also consider that the battery will probably be nearby, with the inevitable release of fumes and gases, however slight. And, some people are more sensitive to noise, and may find even the low hum of a charger to be objectionable. You might want to build a separate closet for the system.

In case you’re wondering where db(A) comes from, here’s a quick run-down.

Sound, or noise, is measured by a logarithmic scale called Sound Pressure Level (SPL). In the 1930s, Fletcher and Munson, working for Bell Labs, developed “equal loudness” curves for human hearing. Human ears aren’t as good at hearing very low frequency sounds, especially below 100 Hz, as they are at the mid-range of normal voice frequencies, about 500 Hz to 3,000 Hz. Fletcher and Munson established 1.0 kHz as the reference point. They found that, for relatively quiet sounds, the SPL at 100 Hz had to be 20 dB louder for humans to perceive the same loudness as at 1.0 kHZ. For louder sounds, the difference wasn’t as great.

The resulting curves, calibrated in phons, gave rise to three ﬁlter characteristics for measuring Sound Level, which is the term for Sound Pressure Level adjusted for the hearing contours. The ﬁlters are named – you guessed it – A, B and C. Filter A is used for virtually all acoustic Sound Level measurements in industry. A level of 65 db(A) is Sound Level, in phons. The A curve matches the ear’s response at 40 phons; the B and C curves are used for higher Sound Levels.

The curves have been revised over the years, but the A ﬁlter remains the same.