What Happens If A Bus Fault Occurs?

WHAT HAPPENS WHEN a battery charger is suddenly presented with a short circuit on its output terminals? There are a few possibilities, and they may be different for the SCR/SCRF and AT chargers. IEEE standard 1375-1998, “Guide for the Protection of Stationary Battery Systems,” gives general guidelines for the charger contribution to a bus fault. Here are some specifics.

If a charger has a dc filter, and especially if it has a battery eliminator filter, the dc output fuse almost certainly will clear on a “high quality” fault* , isolating the charger almost immediately from the dc bus.

The prospective current from the filter’s output capacitor(s) can be very high – 10,000 A or higher. The charger’s dc output fuse, however, is a current-limiting type, and the actual short-circuit current from the charger into the fault would be limited to 10,000 A. The fuse starts to clear in under one millisecond.

What if the bus fault is “low quality,” that is, it supports a few volts? In factory tests on a 24 V, 300 A charger, operating into a fault that supported about 3 Vdc, the dc fuse didn’t clear. The charger delivered 2,000 A for 100 milliseconds, and then reduced its output to its current limit value of 330 Adc.

The AT charger is designed to withstand dc bus faults without clearing output protection, whether circuit breaker or fuse. If the charger is filtered, the filter discharges into the fault, providing several hundred to a few thousand amperes, with a time constant determined by the impedances of the filter and charger wiring. Typically, that’s less than a millisecond.

Fuse and circuit breaker manufacturers provide I2t ratings, which are a measure of the energy that the fuse is able to handle without clearing. They can be used to determine the maximum cumulative (current × time) that a fuse will allow to pass. If you don’t want the dc output protection to clear, choose a fuse (or breaker) with an I2t rating greater than the prospective fault current when the output filter is discharged (usually less than 1 millisecond). We recommend using the standard dc circuit breaker, which is rated to withstand the fault current.

Figure 8a shows the prospective fault current from an AT10.1, 130 V, 50 A charger with a battery eliminator filter, assuming that the only limits to the current are the filter and charger wiring resistances.

After the filter is discharged, the AT charger contributes its current limit value to the fault.

Figure 8a: Prospective fault current from an AT10.1, 130 V, 50 A charger with a battery eliminator ﬁlter, assuming that the only limits to the current are the ﬁlter and charger wiring resistances. The rising graph shows the I2t rating, a measure of the energy that the fuse is able to handle without clearing 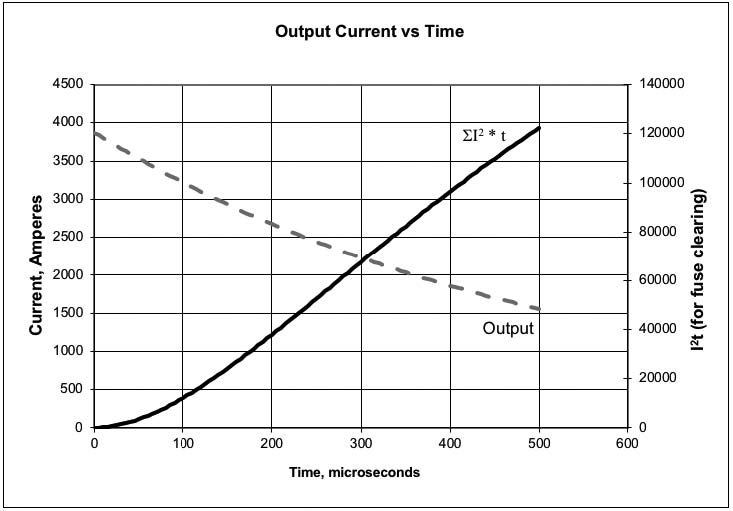